A Tale of Two Libraries

Originally published in Words with Jam.

From the outside, it looks exactly the same as when I used to cycle there from home as a child. A little white, weatherboarded house, surrounded by a picket fence. Like houses up and down this quiet street in the oldest part of the village, Thornhill Village Library still bears the small plaque telling passers-by who lived there in 1867, the year of Canada’s Confederation. The board swinging like a pub sign outside bears the same logo of a spreading tree. 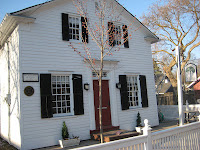 Inside, though, it’s been doing some growing. Beyond the two roomsthat I remember, there’s a children’s library I brought my own children to, ten years ago. And now it seems to have sprouted another room beyond that. High-ceilinged and lit with tall windows that let in the warm, spring sunshine, this rooms is lined with non-fiction books. In the middle is a large island of computer desks and off to one side, a cluster of sofas and chairs just begging for someone to curl up for a good read.

The front of the library, the bit I remember from my childhood, is given over to largely paperback fiction. The spines sport large letters on squares of coloured paper. The colour indicates the genre of the book and the letter gives the first letter of the author’s surname, making it easy to find what you are looking for and, I imagine, to file things. Canadian titles are marked with a red maple leaf.

The children’s section has a double ring of shelves, with a rocking chair in the middle that looks perfect for storytime. There are little wooden stools, a doll’s house and some soft toys. On the back wall are photographs of pets belonging to the young library users. I spot a pig and a donkey in amongst the dogs and cats and rabbits.

The book I eventually settle down to read, on another of the comfy chairs scattered about, is Audrey Niffenegger’s graphic novel, The Night Bookmobile. This is the story of a woman who, at various points in her life, encounters a mysterious mobile library whose ever-expanding shelves hold a copy of every book she has ever read. It seems oddly appropriate in these surroundings – a library I return to every decade or so, which always seems to have grown a bit since last time I saw it and which holds so many memories of my own explorations in reading.
Librarians on the Picket Lines

Thornhill Village Library has survived its own turbulent times. When I was in high school, they build a large central library just two kilometres away. The little village library was considered redundant and threatened with closure. But the locals had other ideas and fought to keep it going. It survived as a paperback library, thrived and then expanded once more. It is now open seven days a week, including two evenings. As much as can be said of anything these days, its future seems secure.

The same cannot be said of libraries a few miles to the south, in the Greater Toronto area. 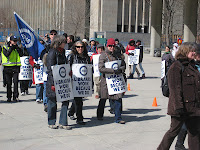 A year ago, with the support of a massive public campaign spearheaded by Margaret Atwood, Toronto librarians won a battle with City authorities to prevent the closure of branches. But any triumph they may have felt has been temporary. Mayor Rob Ford and his councillor brother (dubbed ‘the twin Fordmayors by Atwood) have come back with swingeing budget cuts and new terms of employment that would remove job security from large numbers of library staff.

The librarians responded by going on strike, closing every branch in the Greater Toronto Area from Sunday 18th March. For ten days they maintained a picket line in Nathan Philips Square, outside City Hall, walking in a good humoured circle around a band of musicians singing protest songs and periodically break into a chant. (‘Libraries work because – WE DO!’) One week into the strike, on Sunday afternoon, they held a read-in at the main Toronto Reference Library, inviting the public to ‘come and read a Canadian book.’ They were supported by the Writers’ Union of Canada, and writers including Susan Swan and Douglas Gibson joined in.

It was quite hard to guage how much public support they had this time round. The newspaper coverage was mixed, ranging from those who believe that the librarians action proved they ‘were only in it for the money all along’ to those who thought their quiet, dignified protest was perfectly pitched to disconcert the mayor and his brother.

Margaret Atwood was out of town when the strike began, working on a new book. But she emailed the Globe and Mail, voicing her support for librarians, as well as encouraging her Twitter followers to attend the weekend read-in. “People support libraries but sometimes they don’t understand that is takes people to make them run,” she said.

After ten days, the union concluded a deal with the Library Board that involved some compromise on both sides. But Toronto’s libraries reopened on 30th March with their workers in a better position than those in unions who had to deal directly with the City Council. Toronto still loves its libraries, even if the ‘Twin Fordmayors’ still don’t get it.

Email ThisBlogThis!Share to TwitterShare to FacebookShare to Pinterest
Labels: libraries