Cover Design and the Power of the Author Collective

In five week's time, almost to the minute as I type, I shall be sharing a platform at the Chorleywood Literary Festival with my fellow writers from the Triskele Books author collective.

This week was especially exciting.  Not only did the brochures for the Lit Fest come out (hey, we have a whole page to ourselves!) but the cover designs were revealed for the three books we are launching at the festival.  And it's because of those cover designs that the power of the author collective has been particularly on my mind the last couple of days. 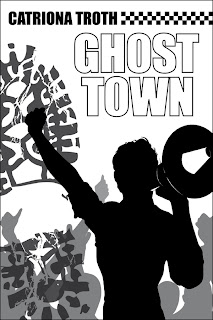 My cover, as you can see, borrows shamelessly from the same source from which I took my title - the Two Tone album covers of bands like The Specials and The Selecter. So far the reception has been overwhelmingly positive. But it could so easily have gone very differently.

I had been thinking about the Ghost Town cover for months. I'm not a terribly visual person, so I may have been a bit sketchy on the details, but I had a very strong concept of what I wanted it to be like. I wanted that look of a Two Tone album cover.  I wanted black and white. I wanted silhouetted figures.  I wanted the sense of protest and threat.

Most of the elements were no problem. Working with the brilliant Jane Dixon-Smith, we quite quickly came up with a style for the title and author name, and brought in that dominant image of a boot print. But once I'd spent a few evenings ploughing through options on sites like Shutterstock, it was obvious that unless I could magic up a cover artist who could actually create bespoke images for me, adding the silhouettes was going to involve a certain amount of compromise.

And that's where things started to go wrong.  I got hung up on finding images that looked like my characters - and in the process I lost the energy that the cover needed. The cover design I was on the verge of approving failed to encapsulate the book's themes.

Then one of my fellow Triskelites stepped in.

Like an old-fashioned publisher's editor, JJ Marsh first encountered Ghost Town as a complete manuscript, but when it was still in need of some significant re-writing.  And like that old-fashioned editor, she has been both the book's greatest champion and its harshest critic.  Whenever I veered off the rails, or failed to live up to the standard she set for us, she would have no hesitation in giving me a good hard slap (metaphorically speaking).  And she wasn't about to stop just because the book was now written.

"I'm not happy," she told me. "That cover is not going to attract the right audience for Ghost Town. You'll be letting yourself down."

Starting over was a pain - for me and for my long-suffering designer. But it was the right thing to do.  I couldn't have seen it for myself.  I knew I was compromising, but what I couldn't see was that I was compromising in the wrong direction. But someone else, equally committed to the book but more dispassionate, could.

And that is the power of the author collective.  The indie author retains responsibility for choosing the book's title, its cover, the way the interior is laid out, the way it is marketed.  But they don't have to do it all alone. An author collective provides a trusted set of eyes and ears who will tell them when they have got things wrong and who will help them find the right path without compromising their vision.

PS And here are the other two fabulous covers that Jane Dixon Smith has designed for us.  Aren't they wonderful?

Triskele Books will be at the Chorleywood Literary Festival on Saturday 16th November.  From 11:00-12:30 we will be running a Human Reference Library on self-publishing.  And from 12:30-13:30 we will be holding a Q&A on the Rise of the Author Collective - discussing our new novels, why we chose to publish with a collective, and why 'self-publishing' doesn't mean doing it all yourself.


Both events are free, but tickets must be reserved via Chorleywood Bookshop. Please call 01923 283566.

Coming Soon:  an interview with Bob Eaton, former Artistic Director of the Belgrade Theatre, Coventry and author of Three Minute Heroes, a play based on the same events that inspired Ghost Town.
Posted by LibraryCat at 03:37