In an event organised by Media Diversified, the launch of Yvvette Edwards’ second novel, The Mother, was held at Waterstones Piccadilly on 31st March. 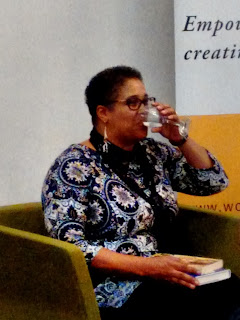 Edwards, interviewed by Media Diversified founder, Joy Francis, proves to be softly spoken, self deprecating, engaging and – despite the often dark nature of her subject matter – very funny. Like many of her characters, she was brought up in Hackney and is of Montserratian-British heritage.

Francis begins by asking Edwards about the early inspirations for her writing.

Edwards says she was first inspired to write by her family’s reaction to the death of Elvis. “If you listened to my mother and aunts, you’d have thought a close family member had died ... I discovered writing could be very cathartic.”

As a young girl, she read ‘anything and everything,’ but she describes reading The Friends by Rosa Guy – with its black protagonist created by a black author – as a seminal moment.

She cites Stephen King as another author she admired. “But I’m getting old. My nerves can’t handle reading his stories any more.”

Her greatest love, though, is reserved for the Nobel prize winner, Toni Morrison. “It’s not too strong to say I worship Toni Morrison. Her language is so beautiful and the subjects she handles are so raw.”

Edwards then reads a passage from her debut novel, A cupboard full of coats, longlisted for the Man Booker prize in 2011. It is a passage where an old family friend, Lemon, cooks soup for Jinx, evoking memories of the past she has tried so hard to bury. Judging the laughter she evokes with certain lines, Edwards taps into many things shared across the Caribbean diaspora.

Francis asks her about the fact that both her books deal, in very different ways, with violence and in particular with knife crime.

Both books arose, in part, from ‘inciting incidents’ in her own life, she tells us. A cupboard full of coats was inspired by a friend who managed to rid herself of a violent partner, only to hear that the same man had murdered his next girlfriend; The Mother by a random and violent knife attack on her own stepson.

“I used to write about far more cheerful subjects, but when I was coming up to by 40th birthday, I think I discovered my mortality,” Edwards says. “I want to write about what isn’t written about – the stories and voices we don’t hear. I write about things I am troubled by.”

Edwards admits that she wrote several pieces before A cupboard full of coats – things that she would send off ‘without any editing’ and would be offended by any criticism she received in return, throw that piece away and start on something else.

“But then I got to the point in my life when I was thinking about what dreams I had to let go of, and what I needed to start taking seriously. I dragged myself up by my lapels and gave myself a talking to.”

And the result was A cupboard full of coats.

“The big difference was that I edited. I discovered that I loved it. That glee of finding the perfect word!”

How difficult had she found ‘that difficult second novel?’

Edwards revealed that she had written about 80 thousand words of another book that wasn’t working. “I asked myself all sorts of questions I’d never asked myself before, like ‘what are your themes?’ I could feel I was struggling. But it allowed me to work through the angst. And as soon I started working on The Mother, the writing flowed again.”

She chose to write from the perspective of a mother, rather than that of the kids experiencing knife crime, because “I wanted a narrator closer to me in age, someone who would ask the questions I wanted to ask, who would want to try and understand the perpetrator.”

Finally, Francis asked the very penetrating question, “How did writing The Mother change you?”

Writing dark books does take you to some dark places, Edwards admits. “But my views on young people and knife crime did undergo a massive shift. I thought I had a strong social conscience anyway, but this enhanced it. I think I am less judgemental, more empathetic.”

You can read my review of A Cupboard Full of Coats on Book Muse UK.