The Independent Foreign Fiction Prize is unique in that the award is shared equally between the writer and their English translator, in recognition of their symbiotic relationship.

The Independent Foreign Fiction Prize attempts to redress this balance by celebrating the very best of translation into English. This year’s shortlist includes writers from Africa, Spain, The Netherlands, Argentina, Croatia and Albania. (You can see the full shortlist and read the judge’s comments on each title here.)

Three of that judging panel for the award – Elif Shafak, Gabriel Josipovici and Boyd Tonkin were at the London Book Fair to discuss the short list and were asked about the general state of health for translation of fiction into English. 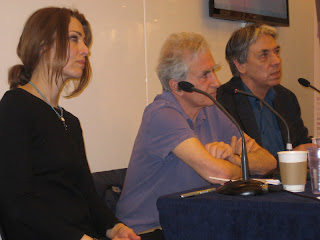 All spoke very highly of the standard of translation they had seen. “There is a kind of harmony, a dance between writer and translator,” Shafak said. “Reading these books made me aware of how much we owe our translators.”

Josipovici regretted that more truly courageous and experimental voices were not getting translated. Literature in translation should not be reduced to the literature of identity – a sort of fictional travelogue. (And indeed the shortlist bucks this trend by including a novel by a Dutch author set in Snowdonia and another by a Spanish author set in Ireland.)

“In terms of geographical spread there are still many areas that are still very sketchily filled in,” Tonkin said. He was particularly disappointed to see very few works translated from languages of the Indian subcontinent, despite the fact many such books are available in English in India.

One member of the audience noted that there were no writers in Arabic on the list and wondered how the Arab Spring was being reflected in fiction.

Tonkin quoted Doris Lessing – literature is analysis after the event. “To create fiction, you need time to acquire perspective. In the short run, it is perhaps better to turn to non-fiction. It could be a decade before we see the great novel of the Arab Spring.”

Another audience member asked whether the judging panel should be looking at the best of books in other languages – those that deserve to be translated.

“What an interesting suggestion,” Tonkin said. “In an ideal world, it would be great to be able to tell publishers, ‘here’s a list of what you’re missing.’ But I think it might be beyond our time and resources.”

Another way in which the London Book Fair fosters an awareness of literature from other countries is through its Market Focus programme – or to use the term Kamila Shamsie would prefer, ‘Literature Focus’.  LBF aims to raise awareness of writing from one selected country through a programme of events and author interviews. In previous years, India, China and Russia, among others, have been guest of honour at the Fair, and this year it was the turn of Turkey.

Elif Shafak, the Turkish author who was on the judging panel for the Independent Foreign Fiction Prize, was author of the day at the LBF on Tuesday, when I couldn’t be there. But I did catch another Turkish novelist, Oya Baydar, in conversation with Kamila Shamsie. Only one of Baydar’s novels, The Lost Word, has been translated into English, and the conversation is conducted through a translator. 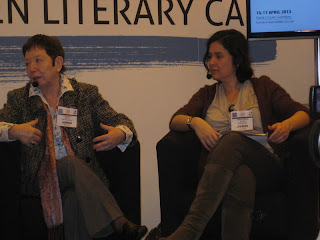 After publishing her first novel, God Forgot His Children, when she was still in high school, Baydar was drawn into politics. “It was unavoidable to be involved in left wing politics in the 1960s. We saw ourselves as revolutionaries and you could not be a part-time revolutionary.”

“Many people in Turkey – the Kurdish, the Armenians – feel like foreigners in their own country. My experience has given me great sympathy with them. Since my return, I have worked in support of the Kurds.”

Even though the situation in Turkey much more relaxed, serious issues of freedom of expression remain. Baydar noted that, while it is easier to discuss the Kurdish issue, there are still heavy restrictions around any mention of the Armenian genocide.

“Saying anything slightly outside the ideological lines can lead to trouble. You may not go to prison any more, but you may lose your job as a journalist.”

Indeed, as the LBF opened, news came that the Turkish composer, Fazal Say, had been given a 10 month suspended sentence for ‘insulting religion’ on Twitter.

Baydar is optimistic about the future, but also fearful. “We do not know if the democratisation of Turkey will continue, or whether our dreams will be broken.”

Catriona Troth was tweeting from the London Book Fair on behalf of @TriskeleBooks.  You can also read more of her adventures on the Words with Jam blog.
Posted by LibraryCat at 06:51