The Authors are Taking Over the Asylum: London Book Fair 2013 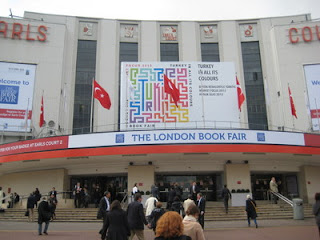 What a difference a year makes.

Last year, at the launch of the Alliance of Independent Authors, we sat high up in a room overlooking the exhibition halls at Earl’s Court and heard Orna Ross declare:

One year later, no longer a collection of individual authors, but a growing and supportive community, we were down on the main exhibition floor, overflowing the ‘compact and bijou’ space of the Author Lounge, and making our voices heard loud and clear.

No doubt about it, the publishing industry is being shown it can no longer treat writers as a commodity to be read and not heard. Book deals can’t just be concluded between agents and editors in the veiled secrecy of the International Rights Centre. Writers want to take control of their own body of work – and they are learning how from the likes of Orna Ross, Joanna Penn, Ben Galley, David Gaughran and other the other powerhouses behind the Alliance of Independent Authors.

ALLi’s presence at the London Book Fair 2013 kicked off with a seminar from Orna Ross on Going Indie, which I callously forewent in order to see Kamila Shamsie in conversation with Oya Baydar. And there was a lot of other ALLi activity that I couldn’t cover. Mark Coker and Steena Holmes were at The Digital Minds Conference over the weekend. Orna Ross and Joanna Penn gave seminars in the Love Learning conference. And in the Author Lounge, audiences repeatedly filled and overflowed the available space for the scheduled panel talks, advice and workshops.

In fact, space became a major issue all round. On Monday, the audience for the talks was spilling out into the aisles outside, with people craning to hear and waiting in line in the hopes of getting a better spot for the next session as some people moved on. By Tuesday, the organisers had got twitchy about this. Those acting as gatekeepers, with their little clickers scanning our badges, were limiting the numbers coming into the lounge, and the security folk were moving people on if they even stopped outside to grab a quick photo. Many people missed talks they would have loved to attend, and it all led to an inevitable conclusion:

WE NEED A CONSIDERABLY BIGGER LOUNGE.

That is not to detract from what we did achieve over the three days. ALLi launched its new book, Choosing a Self-Publishing Service – free to members and available to buy from Amazon as an ebook and (shortly) print version too. ALLi members were able to network one another, attaching faces, voices and the beginnings of real friendships to those we had previously known only by their Facebook handles. On Monday night, we celebrated ALLi’s first birthday in style, with food and drink provided by Amazon. (Now how’s that for recognition?) We turned out in force to hear the redoubtable Joanna Penn fire our enthusiasm for proper grown-up marketing strategies (about which more on this blog next week). And we had the opportunity, on Wednesday, to showcase our own work and to talk to new and aspiring self-publishers about what we do and why we do it.

I can’t tell you what a pleasure it was to be able to tell so many people about Triskele Books and about why we think the author collective is the way to go. Setting out as a self-publisher on your own is scary, as the seven of us all know. Having a team behind you, giving you support, sharing the burden of editing and (oh, lord!) marketing makes a world of difference. And by the way people’s eyes lit up as I talked, a lot of others are starting to think the same way.

AS ALLI EXEMPLIFIES ON A LARGE SCALE, SO TRISKELE SHOWS ON A SMALL SCALE –

WE ARE BETTER WORKING AS A TEAM.

And, hey, seeing our six published book displayed on a shelf on the New Title Showcase stand, their gorgeous covers from JD Smith Design standing out proudly and looking as professional as any at the Fair, was a pretty damn fine affirmation too.